Over recent years, ‘cloud-native’ service providers have developed ways to build and run massive data centers with a high degree of automation, to reduce operational overheads and deliver levels of service agility beyond traditional carrier infrastructure. RtBrick’s open BNG brings these same benefits to carrier access networks, by disaggregating software from hardware and applying the same battle-hardened DevOps cloud automation tools that have been adopted by the world’s biggest cloud providers. All the benefits of RtBricks' open BNG software are now available as a Consolidated BNG, that provides full BNG functionality on a single compact hardware switch.

The RtBrick Consolidated BNG is delivered as a software container, running on the Open Network Linux (ONL) provided by the hardware SKU manufacturers, which handles peripherals such as LEDs, temperature sensors, and so on. There are no dependencies on either the kernel or the hardware platform components, so RtBrick’s containers can be run on the Linux version of your choice.

The RtBrick Consolidated BNG software can run on either an x86 server as a vBNG, or for most carrier-scale deployments, on low-cost but powerful bare-metal switches as an open BNG.

RtBrick’s BNG software is compiled for your specific use-case, using only the features you need. With an order of magnitude fewer lines of code, and a single state database rather than hundreds, the whole system is less complex, less prone to bugs and has much faster restart times. It also allows you to pick and mix between the latest silicon and the best available software.

A consolidated BNG provides all the functionality of a Spine-Leaf BNG but on a single, lower-cost bare-metal switch, making it more economical where there are only low concentrations of subscribers. It also runs on smaller form-factor hardware, that is hardened for deployments in cabinets and cell-sets. 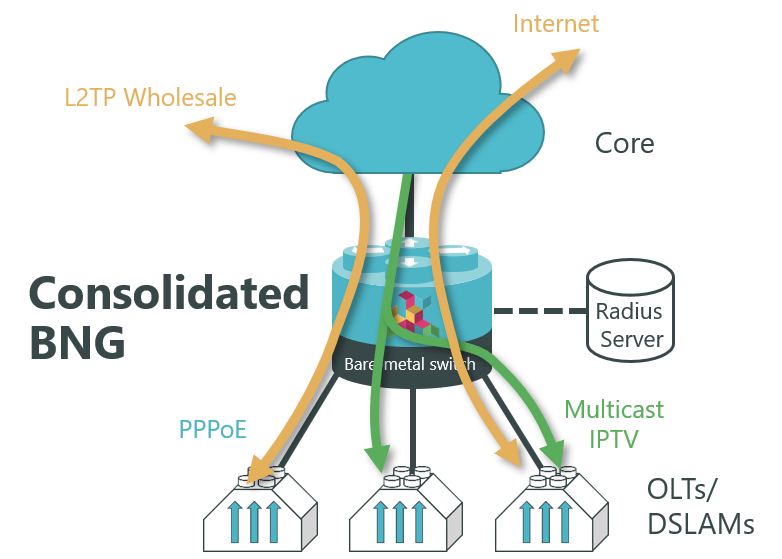 Consolidated BNG on a single switch

The RtBrick BNG software can also run in a Spine-Leaf architecture, enabling massive scale, or on an x86 server to create a vBNG (Virtual Broadband Network Gateway).

The result is a BNG that can be managed using the latest Web2.0 tools through a ‘single pane of glass’, with Zero-Touch-Provisioning.