Over recent years, ‘cloud-native’ service providers have developed ways to build and run massive data centers with a high degree of automation, to reduce operational overheads and deliver levels of service agility beyond traditional carrier infrastructure. RtBrick’s open BNG brings these same benefits to carrier access networks, by disaggregating software from hardware and applying the same battle-hardened DevOps cloud automation tools that have been adopted by the world’s biggest cloud providers.

The RtBrick BNG is delivered as a software container, running on the Open Network Linux (ONL) provided by the hardware SKU manufacturers, which handles peripherals such as LEDs, temperature sensors, and so on. There are no dependencies on either the kernel or the hardware platform components, so RtBrick’s containers can be run on the Linux version of your choice.

The RtBrick BNG software can run on either an x86 server as a vBNG, or for most carrier-scale deployments, on low-cost but powerful bare-metal switches as an open BNG. It is hugely scalable using a Spine-Leaf architecture.

· Massive scalability - supporting hundreds of thousands of subscribers on a single BNG, with sub-second convergence of the full Internet routing table

RtBrick’s BNG software is compiled for your specific use-case, using only the features you need. With an order of magnitude fewer lines of code, and a single state database rather than hundreds, the whole system is less complex, less prone to bugs and has much faster restart times. It also allows you to pick and mix between the latest silicon and the best available software.

The BNG’s subscriber management capacity is provided in a scale-out architecture called the Point-Of-Deployment (PoD), also known as a SEBA PoD (SDN Enabled PoD). A large-scale PoD consists of Access Leaf Routers aggregated by a layer of Spine Leaf Routers in an auto-provisioned CLOS topology. The Access Leaves deliver subscriber management functionality. For even greater scalability a layer of Border Leaves can be added to provide more connectivity to the core of the provider network.

The leaves can be scaled out horizontally to increase the number of subscribers supported on the PoD, providing a pay-as-you-grow architecture. PPPoE Subscribers can be terminated on the Access Leaf Routers or tunnelled to an LNS over L2TPv2. L2 Cross Connect (L2X) allows subscriber traffic to be tunnelled out of the PoD at Layer 2, providing wholesale connectivity. 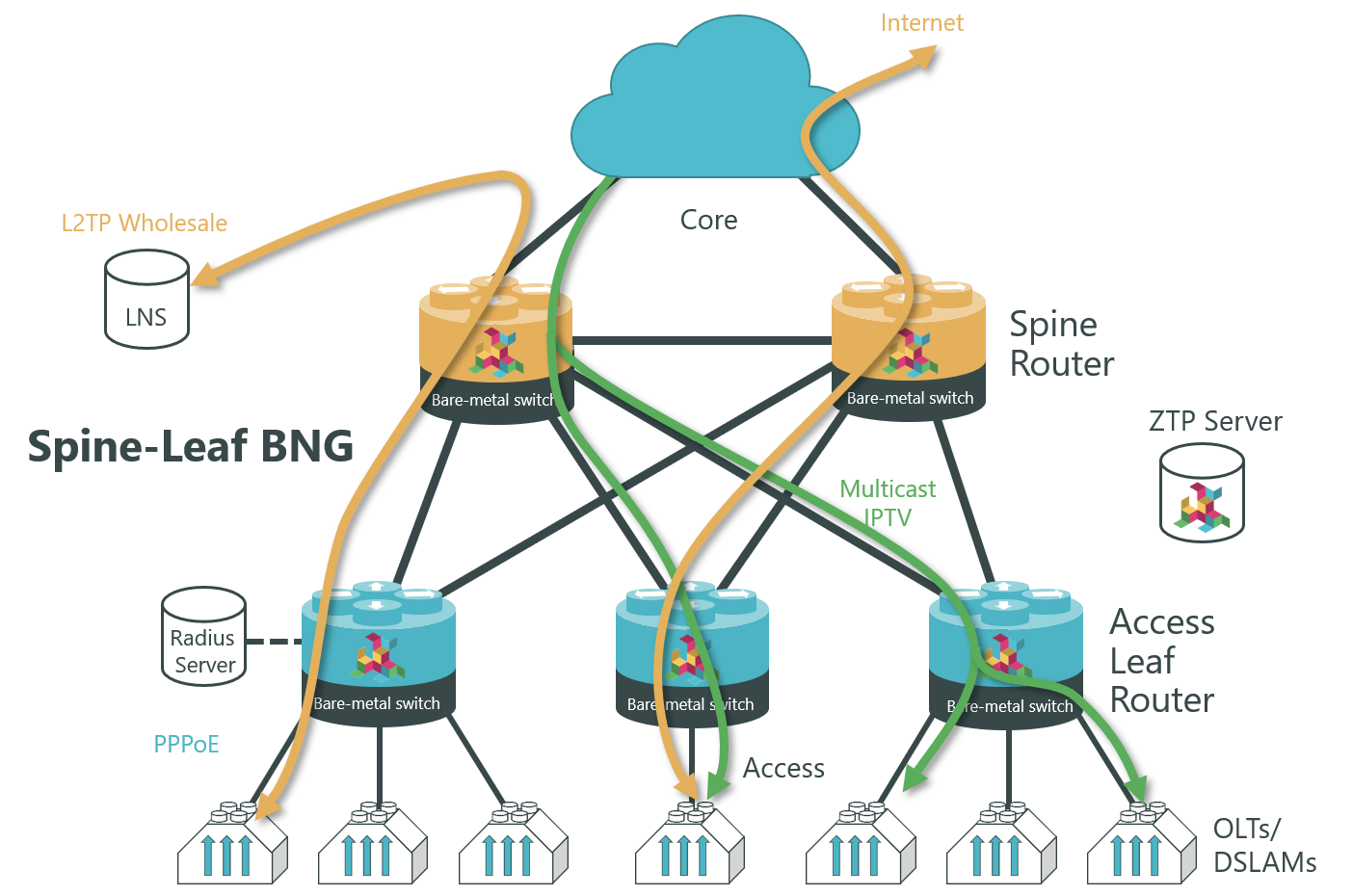 For smaller requirements, Spine and Border Leaf functionality can be collapsed onto a single hardware platform as a Consolidated BNG. The RtBrick BNG software can also run on an x86 server to create a vBNG (Virtual Broadband Network Gateway).

Our Open BNG software can deliver most of your complex broadband services, with HQoS schemes and IPTV support, for example. But you can also re-use your existing infrastructure to continue to provide lower volume legacy services, and optimize the rest of the network for the bulk of your traffic - providing large volumes of high bandwidth services at a lower cost-point with a web-scale operating environment. So your RtBrick BNG can act as a service cross-connect, routing each subscriber to the appropriate network infrastructure and extending the life of your high-cost legacy BRAS or BNG systems, for example.

The result is a BNG that can be managed using the latest Web2.0 tools through a ‘single pane of glass’, with Zero-Touch-Provisioning.

Deutsche Telekom is a good example of a carrier looking to benefit from a disaggregated access network, with their Access 4.0 project.

“The focus is on having a more open, more flexible solution. The whole story is about disaggregation of hardware and software. RtBrick brings a piece of software that sits on the switches. They have built software that can program Broadcom chips, so they do the full BNG function.” Robert Soukup, DT’s senior program manager for Access 4.0 (quoted in an interview with FierceTelecom, March 2019)